I've slowed down my knife collecting a lot, so I have not had many new knives to consider. However, I did buy a Kershaw Leek off eBay a little while ago, and I feel the need (for some strange reason I don't fully understand!) to write about it. If you want to know the basic specs of the knife, best to go to the official web site for this knife here.

Here it is in the hand, in all it's glory. 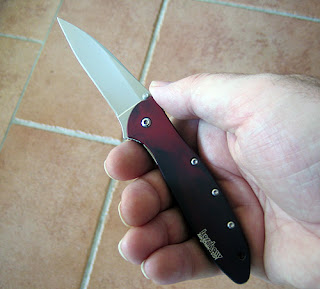 The exact model I have is a 1660BR, which has a nice red and black smoke handle. In the hand it feels very nice, being a great all round shape. It's a "fine" knife, that is, it's somewhat delicate and thin in terms of the metals and construction. This is not a knife for chopping down saplings or whittling pine, it's much more at home opening letters and parcels, cutting string and cardboard. It fills my hand, just, with all four fingers getting around the handle with pretty much no extra handle left.

To perhaps illustrate the point here about it's "fineness", I think it is interesting to look at the liner lock (it's called a frame lock on the official web site, I don't know why) compared to the BEE L05, a knife I reviewed and really like a lot. 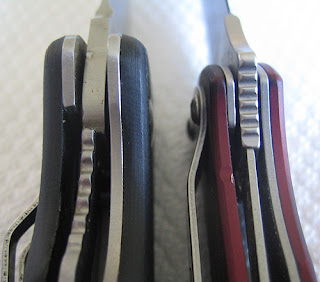 I think you can see the difference in the thickness of the liner easily here. I want to say that although it is quite thin, it doesn't feel flimsy. I think it's about as thin as you can get away with and still be safe. There is no up/down movement on my knife at all, it locks up quite tight, although there is a tiny bit of side to side.

There are several things about this knife that I really love. Let me rabbit on a bit now about the opening action. It may not be important to you, but to me it's an important issue as I tend to fiddle with knives where I like the opening action, then I tend to like them more. I still have all my fingers, which is somewhat surprising! Anyway, the Leek has a very different opening (and closing) action to the BEE L05. For a start, it has Kershaws "Speedsafe" mechanism, which in effect makes it an assisted opening knife. Please be aware that these mechanisms are not legal everywhere, so check out the situation in your area.

It can be deployed by the dual sided thumb studs, although this is NOT how you generally do it as they are small and cramped up against the scales so it's a bit of a contortion to get your thumb in the right place. Once open the studs nestle into small recesses in the handle, providing additional strength, which is good. They are not the worst thumb studs I have ever used, but they are also some way away from being the best. If that was all there was to open up the blade, I would not like the knife really. Fortunately, the thumb studs are mostly redundant, as this knife is also a flipper.

I don't usually like flippers, and own very few. The reason is that an unassisted flipper needs a flick of the wrist also to deploy, and I don't like that as it can make the knife fly across the room - open - if your hand is slippery or you are just being uncoordinated. It also take up more room, and is less certain to be accomplished. If it's loose enough to flip open easily, you then have issues with blade play. It's not an easy thing to get right. The reason the Leek does get it right is that the speedsafe does the work that a wrist flick would otherwise achieve.

The flipper on this knife is a small triangle of the blade protruding when it's closed, and it's a simple matter of pushing this in for the blade to spring open. And boy, does it do that in a hurry. It's very fast, in my opinion, and clicks locked with a very nice sound too. This is what I find mesmerising - pushing that flipper to the exact point where the tension on the speedsafe takes over and flips it out. Even doing it this way, it still opens with confidence. It's a brilliantly balanced tension, and a very tactile experience to play with.

So, the opening is fun, what about the closing? Well, there again it's a very different experience to the BEE L05, in that there is a tension when closing the blade. This is putting the stress back into the knife so that the speedsafe system can open it again next time. If all you have ever used is unassisted knives, when you first close the Leek it feels quite weird. Obviously it is harder, and a fraction riskier also. If you slip in some way and fluff it up, the knife is likely to spring back open again. This is something to be careful about then. The technique I use is to push the blade home using my thumb as well as forefinger.

If this is a candidate for your EDC knife, then there is a strong chance this is going to spend some time in your pocket. So what's that like? Well, to start off with, consider the safety. You do not want a sharp little knife like this opening up in your pants, particularly if you are a male! Just thinking about it makes me cross my legs. So let's have a look at another interesting feature of this knife - the blade lock. 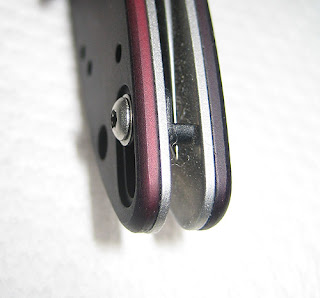 Ignoring for a minute the pesky hair that managed to get into the mechanism when I took the shot (hey, this isn't a safe queen, it gets crap in it), you can see the lock at the end of the knife.The screw on the outside slides up and down to lock or release the blade. On the inside I believe it is made of plastic so that it should not dull the knife if you try and close it with the knife lock in the locked position (and it hits it). Actually, if you do do this (and I never have, but just tried it now to see what would happen) the tip of the blade is just out of the knife, which isn't good, as it might feel to you like it's both closed and your brain might think also locked. SO be aware of where that sliding lock is, ok! My knife has a good tension on the lock, but I can imagine it could be also an issue if this was either too tight or too loose - although I believe it can be adjusted with the torx screw.

One other thing to mention while this picture is in your mind is to observe the very fine nature of the blade tip. It's one of the thinnest and pointiest (is that a word?!) tips of any knife I own, and because of this it is very fragile. The tip is perfect for very fine cutting work on something soft like paper. However, let me tell you a little about mine. I was opening and closing the knife at my desk as I often do, because as I have already said it give me pleasure and also then I have muscle memory on how to do it without thinking and can deploy instinctively. Anyway, I was also multitasking and was looking at my computer and drinking a cup of tea. I opened the knife just a fraction close to my cup of tea and the tip hit the mug, just. That was enough to break off a tiny piece of the tip - no smaller than a pinhead - that was the very very tip. If you looked at it now you would still consider it to have a fine tip on it, but I know it was even sharper. So it doesn't take much to lose the factory tip, which is a negative with this knife.

Anyway, back to the pocket carry issue. When you put it in there, it is best to lock it first. Now, if you think about it, this makes it slower to deploy from your pocket as you then have to unlock again. It is possible to unlock it and then move the knife around to open it all as a one handed movement, but it's not exaclty quick or elegant. I do like the idea of having a lock, but like so many things in life, the solution to one problem creates more problems. At least you have the freedom of choice to use it or not, as you wish. Also, for people that care, it's a tip down right handed clip only. The clip itslef is sturdy and just right in terms of getting on and off your pants, so it's a good clip.

Overall I really, really like the Kershaw Leek. It's a terrific knife for light duties, and is easy to carry and deploy. It's light and mine came wicked sharp, and still is. The ergonomics are very good, and the features of the speedsafe and blade lock make it somewhat different to other knives. It is very satisfying to just spend some time opening and closing this knife, almost absentmindedly, while you are doing other things. I like the way it looks, and I like the way it feels. It's not a heavy duty knife, and the tip needs care in particular, but it will handle most everyday cutting tasks so it makes a decent EDC knife. It's also not very expensive, so I'd recommend it fairly unreservedly.
Posted by Saul at 1:38 PM