Knives - The Next Generation

Well it was kind of bound to happen. As I seem to be on a journey to learn basic life skills, and have also developed a hobby of collecting and appreciating knives, so it is somewhat natural that these two things have collided. The result of this collision was a weekend knife making course in Canberra at the Tharwa Valley Forge. It was quite expensive, and was a birthday present to myself.

To cut to the chase, I made these two knives ... 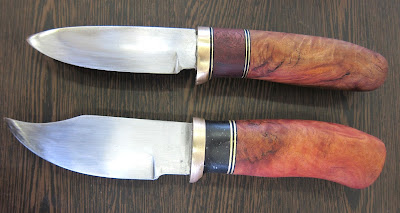 Which I have to say I'm quite proud of, for my first attempt! These knives took two days of fairly hard work to make. The first part, where the blade was forged out of a steel bar was particularly hard for me, and I lost arm strength when in the last stages of the bowie (lower one). The hammers become super heavy after swinging them around for an hour or so.

The top knife was based on a book I read during the weekend on Bob Loveless, a classic american knifemaker. I really like his knife designs, for their simplicity has great functional beauty. The book also told his life story, and it was interesting in itself, but now ended as he has recently died. So my homage to him was the deliberately finer of the two knives, with a "less is more" approach trying to copy as many of his design elements as I could. The spine of the blade was supposed to be level with the guard, and it's close, but not quite right. I have since sanded it down a fraction more.

Both knives are pretty close to the design I did in on the first night, actually, as this shot shows. Note that I did the design in pen, which is fairly stupid. The bowie was not supposed to have such a large ricasso, but there are so many times that I just had to say "Well, it's not perfect but in the time I have, and the skills I have, it's the way it is, so move on!". 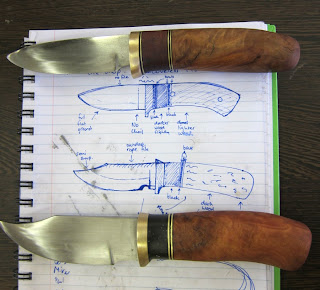 The steel has been properly heat treated, and due to it's thickness I believe will last a long, long time with proper care. The wood used on the Loveless is Jarra (dark) and Applebox (lighter), on the bowie is Mulga. The mulga is heavier, harder, has a nice glow to the wood and has nice grain. The black part of the bowie is in fact a plastic material used in kitchen benchtops, and has a slight fleck to it. The yellow metal is brass, which over time will tarnish if it's not polished of course.

I really enjoyed making these knives. The course was well run, friendly, and informative. The sense of achievement at the end was uplifting. It was also exhausting, and sleeping was no problem after each day!

What's next then? Well, I could make some more blades, but I do not have a burning desire to do that at the moment. I think I could do a better job of creating the knives a second time around, BUT on the other hand I don't have all the equipment nor a friendly and skilled teacher to save me from major mistakes (like not making the blade straight, for example...). I have developed a deep respect for well finished hand made knives. I now know, first hand, how hard it is. Mass produced knives have made us expect perfection, and in a hand made world, this is a very tall order.

Instead then, I am motivated by an outstanding need -- what I need to do is make some leather sheaths to hold the knives. They need a home, and a way for me to carry them should I want to. This is another skill to learn, one I want to learn as much for the sake of completeness than anything else. I do like the creative element of leather work, so perhaps I will really groove to it once I try it, I don't know yet.

I am also not quite happy with the sharpness levels on these knives. The bowie is the best of the two, and I de-boned a leg of lamb a few days ago and it did the job better than any other knife we have in the kitchen. I already have some sharpening tools, but I'm not really happy with them or the results I have gotten so far. Again, I am learning a skill here, but I think I might not have the right tools for the job yet. So... I have invested in another eBay purchase, this time a Lansky sharpening system, which should keep the angles sorted and hopefully enable me to get a really fine edge. My goal is to make them shaving sharp.

If I create a really nice sheath, and get them good and sharp, there is one last step to make them completely "done". That is, getting them engraved with my mark. I have already scoped that out with an engraver (I won't do it myself) and there is a moderate cost involved, so I may or may not go that extra step.

The journey continues!
Posted by Saul at 8:12 PM